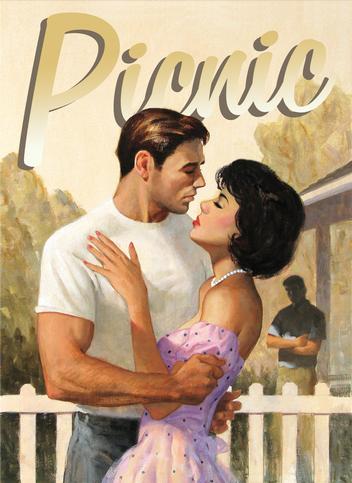 The greatest risk is love.
It’s a peaceful time for a quiet Kansas town in the early 1950s and summer is drawing to a close with the excitement of the annual Labor Day picnic. But the sudden arrival of Hal Carter, a handsome young drifter, stirs the emotions of a group of neighbors as he develops an instant attraction with Madge, one of the most beautiful girls in town. As Hal hides deep insecurities with grand shows of bravado, Madge is torn between her heart and her head in this Pulitzer Prize-winning drama where passions turn one small community upside down.

Picnic at Triad Stage is a Triumph

I'm sorry to say that I was not familiar with William Inge's masterpiece PICNIC. I was thrilled to have the opportunity to attend the opening night performance of Triad Stage's production of this "summer romance".

Triad Stage's Picnic Is a Superb Rendition of a Theater Classic

Staging a period production is always a challenge: modernizing it inflicts change, and audiences don’t always like change; keeping the integrity of the era in which it was written runs the risk of seeming old-fashioned and stilted.

Triad Stage’s Picnic manages to overcome both challenges: while keeping the feel and face of the 1950s, when William Inge wrote the play, Triad Stage artistic director Preston Lane has made the show as fresh and titillating as a work wet off the press.

Theatregoers at Triad Stage's revival of Williams Inge's Picnic, the Pulitzer Prize-winning drama set over a hot Labor Day weekend, have been getting to their seats by crunching across a carpet of dead sod.

Triad Stage has opened their “Season Together” with a winner! Their production of William Inge’s “Picnic” was energetic and moving, comedic and heartbreaking, much like the human condition.

So when the Triad Stage scenic designer envisioned a lawn for his set of William Inge's drama, "Picnic," he naturally pictured real grass.

But not a lush, plush lawn.