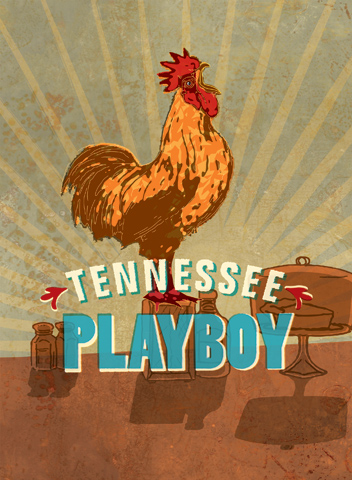 A Redneck Romance
written and directed by Preston Lane
freely adapted from J.M. Synge's The Playboy of the Western World

Everyone loves a bad boy.

It’s just another rainy night at a 24-hour truck stop in East Tennessee when a stranger staggers in with a shocking tale of a murder most foul. He killed his father, he claims—knocked him over the head and left him for dead. Desperate, Chuck Macadie begs for a place to hide. His story is so thrilling and his deed so daring that instead of turning him over to the law, the locals embrace him as a hero. But his fortunes change when an unexpected visitor suddenly appears. This world-premiere adaptation is a celebration of first love, tall tales and second chances.

This rolling advertisement for the Triad Stage production of "Tennessee Playboy" was an eye-catching sight this morning on Elm Street. Nothing says "playboy" like a muscle car, in this case a vintage Camaro.

THROUGH 6/30: Triad Stage Closes Its Season with a Playboy and Triumph!

The Triad Stage’s debut production of Tennessee Playboy triumphs with achievements on every theatrical level. From the text, cast, and production team, this is theatre functioning at its finest. For any regional theater fortunate enough to celebrate its 12th season, I can think of no better conclusion than the swig of moonshine, jukebox dance, and tearful laughter that is Tennessee Playboy.

For dialogue, “I tried to find the poetry of Appalachia to replace the poetry of Ireland,” Lane said. “That TV don’t work,” Pearlene tells Chuck, who fears that police have broadcast his picture. “Ain’t worked for months,” says her father, Mitch Dunbar. “I got so damned mad when Dolly Parton left ‘The Porter Wagoner Show,’ I took my .22 and blew the Wagonmasters straight to hell.”

WUNC "The State of Things

Host Frank Stasio talks to Preston Lane about his original adaptation and the cast performs a scene.

Walking the line between bad teeth and moonshine

There is a fun, pervasive and provoking stereotype that comes with being a mountain dweller. The rustic, barefooted moonshine-makers have been parodied for decades. But anyone who has ever visited east Tennessee, or even Boone for that matter, has seen that there are elements truth and fiction in the label of “hillbilly.”