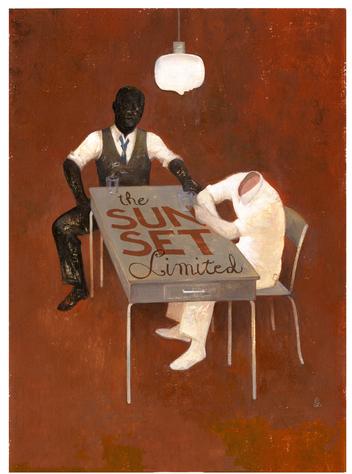 Life matters.
An African-American ex-con saves the life of a white professor on a subway platform in New York City, even though the professor didn’t wish for such deliverance. The incident leads the two men back to a Harlem apartment where hope and despair clash in a battle that shakes both men to the core of their existence. Is one an angel? Is the other completely lost? Pulitzer Prize-winning novelist McCarthy’s fierce and passionate writing explodes in this drama of two lives changed forever by an act of grace.

The challenge in a minimalist play is to give a feeling of richness and depth, even though there might be few characters and relatively little scenic or costume design.

To stage such a production takes faith in cast, crew and audience, and Preston Lane takes that leap once again in The Sunset Limited, a one-act, one-scene play by Cormac McCarthy, and the fourth show in Triad Stage' s 10th season.

Who wins in a battle of hope and despair?

As a play driven by dialogue rather than action, The Sunset Limited lives up to creator Cormac McCarthy’s description of “a novel in dramatic form.” And no dialogue is more dramatic than his characters’ discussion of life and death, and ultimately hope and despair.