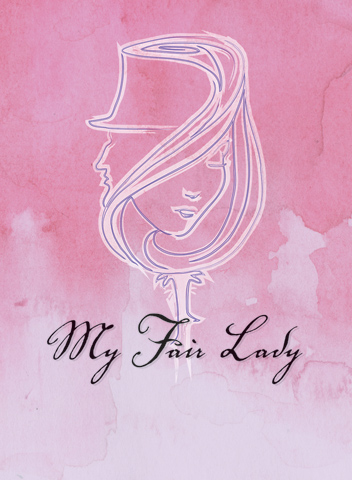 ALL REMAINING PERFORMANCES ARE SOLD OUT!

Welcome one of the greatest Broadway musicals of all time, filled with delightful characters and unforgettable songs. Henry Higgins is rich. Eliza Doolittle is poor. He’s proper. She’s common. He’s educated. She’s streetwise. But a boastful bet will change both their lives forever. As he transforms the lowly flower girl into a sophisticated lady, they discover more about themselves than they ever expected. From cockney weddings to the street where you live, Triad Stage re-imagines this unlikely love story with an intimate, inventive approach.

In the 1964 musical film My Fair Lady Audrey Hepburn casts a rich, heart-warming and immovable image in many memories. Her character’s transformation from a poor, cockney flower girl to a refined “duchess” has warmed many hearts, which is one reason why Triad students and residents alike were thrilled to feel a part of Triad Stage’s theatrical production. To bring to life such a large, legendary and magnificent production, Triad Stage relied on this community.

From the Front Row

Watching the new production at Greensboro's Triad Stage, however, one might easily forget having ever seen the Academy Award winning film version, as each player slips seamlessly into the iconic roles, making them wholly and completely their own.

THROUGH 5/5: My Fair Lady Shines at Triad Stage

We’ve grown accustomed to the sublime audacity of Triad Stage, pushing boundaries, testing waters, and forging paths in regional theatre. A small theatre doesn’t win national awards by playing it safe. So, being that My Fair Lady is arguably one of the most beloved American musicals ever, why not go for it? Triad Stage decided it must and audiences will be enthralled with the result.

Triad Stage presents a reimagined production of My Fair Lady, the Tony Award-winning musical by Alan Jay Lerner and Frederick Loewe, beginning April 7, prior to an official opening April 12, at the Triad's Pyrle Theater in Greensboro, NC.

Appalachian Summer Festival's annual summer trip to Triad Stage includes a bus trip down the mountain from Boone, tickets to the show and dinner afterwards at O.Henry Hotel.

Catch a slice of Broadway at Triad Stage

Triad Stage Will Reimagine My Fair Lady for Cast of Ten; Julia Osborne and Michael McKenzie to Star

Triad Stage will present a reimagined production of My Fair Lady, the Tony Award-winning musical by Alan Jay Lerner and Frederick Loewe, beginning April 7, prior to an official opening April 12, at the Triad's Pyrle Theater in Greensboro, NC. Directed by Bryan Conger, the limited engagement will continue through May 5.