A Dress Up Farce 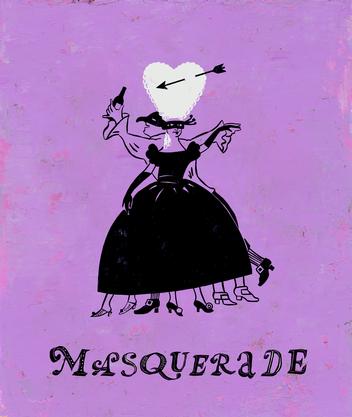 by Ludvig Holberg
adapted and directed by Preston Lane

Love's in disguise.
The hot new place to party is a masquerade where the young and hip go wild. Two fathers arrange the marriage of their children, but when the kids fall in love behind masks with someone they think they've never met, everything that can go wrong is almost certain to get even worse. Add in a mother who just wants to dance, faithful servants determined to protect young love and enough disguises to make your head spin. You'll laugh your mask off!

Masquerade - a Feast for Eyes & Ears at Triad Stage

If you miss Masquerade, Triad Stage's 10th season finale, you will miss what is surely one of the most riotous and ribald productions in this theatre company's history. Sure, it's a theatrical celebration, but it's also a straight-up rave commemorating everything Triad Stage has accomplished in its decade of existence.

To celebrate the end of Triad Stage’s 10th year, Artistic Director Preston Lane brought home Masquerade, a Danish delicacy. To modernize the play for his American audience, Lane relied not just on his own adaptation, but also on his design team, including costume designer Kelsey Hunt.

Now in its 10th season, Triad Stage is bringing dance as a part of its focus to its latest production, or should I say, "Masquerade" as the play is all about the goings on at the masquerade, the newest social "it" factor in town.

The work of Ludvig Holberg — the 18th-century Danish dramatist little-known in the U.S. but regarded as a pillar in the world of Danish literature — will get new life in a world-premiere adaptation of his comedy, Masquerade, in North Carolina.