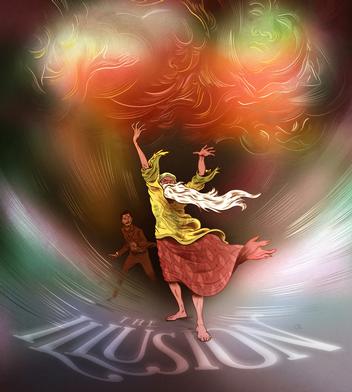 Enter the mysterious lair of the sorcerer Alcandre where Pridamant seeks to learn what has become of the son he banished years ago. In the deepening darkness, the magician conjures three separate moments from the young man’s life; each finds him in a different location and with a different name. As the mysterious scenes progress, passions ignite, allegiances shift and the unhoped-for comes to pass until Pridamant discovers the unexpected truth about his son. Take a comic trip into the world of wizardry where romance, wit, action and adventure come alive at every turn.

As gray columns arch across the ceiling, almost consuming the front audience, Triad Stage is transformed into a magical realm. The way a world comes alive onstage is truly miraculous, and although Triad Stage has a “sorcerer” onstage this month, it was no wizard that raised the walls and brought the set to life — those details were left in the ever-capable hands of a technical team.

A Spellbinding 'Illusion' at Triad Stage

The Illusion is a play about theatre, and no better way to end Triad Stage’s award-winning 11th season.

Billed as a comic fantasy, Tony Kushner’s adaptation of The Illusion (based on French playwright Pierre Corneille’s 1636 work, L'Illusion comique) brings all of Triad Stage's collective talents to the fore, and they are, as usual, astounding. Comical, eye-popping, and mesmerizing, it ties the season up in an anything-but-neat package, but one that is a delight to unwrap.