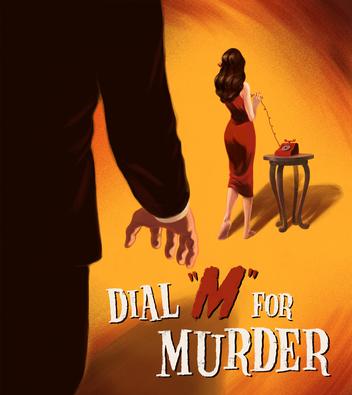 A Diabolical Thriller
by Frederick Knott
directed by Preston Lane

Don't pick up the phone.

Tony Wendice has devised the perfect crime. With a lot of planning, a solid alibi and a bit of blackmail, he’s sure to make a fortune. All he has to do is kill his wife. But when his scheme goes disastrously wrong, he finds himself in a suspenseful game of cat and mouse to stay one step ahead of a determined police detective and a suspicious mystery writer out to uncover the truth. Can he still get away with murder? It’s an unexpected glimpse into the mind of a vengeful killer and the race to save his desperate victim.

Kicking Off Its 11th Season, Triad Stage Has a Hard Act to Follow: Itself

In its 10th season, Triad Stage was designated as one of the nation's top ten most promising regional theatres by the American Theatre Wing (founder of the Tony Awards). When you're at the top, where is there to go? Nowhere but up, apparently. In Dial "M" for Murder, Triad Stage's 11th season premiere, director Preston Lane brings audiences a first-class product : a pinch of Hitchcock, a smattering of Broadway, a touch of the London stage. Watching this thriller is a thrill in itself and should not be missed, no matter what theatrical genre you subscribe to.

Triad Stage Director Preston Lane is turning to some big guns for sight and sound in the new production of Frederick Knot's successful stage play Dial "M" for Murder. UNCSA theatre sound design faculty David E. Smith worked for 8 years with the Royal National Theatre in London and projection designer Bill McCord has worked on blockbuster films JFK and O Brother Where Art Thou. They all talk shop with TAUC host David Ford.