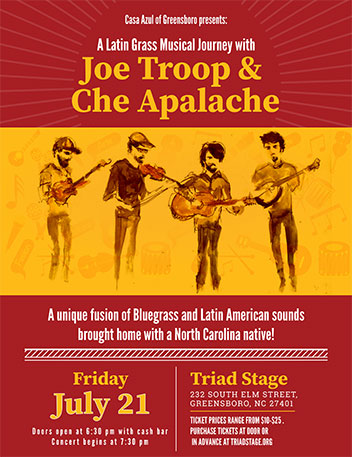 Latin Grass Music comes to Greensboro! Che Apalache, or “my Appalachian homeboy,” is a four-man string band based in Buenos Aires with members from Argentina, Mexico and the United States. The group’s founder Joe Troop, is a North Carolina native who moved to Argentina in 2010. Joe spent his time playing in the local music scene and teaching bluegrass and old-time music. In 2013, he and three of his most dedicated students joined to form Che Apalache.

While Che Apalache began as a traditional Appalachian string band, their music has since evolved to include Latin American styles as well, resulting in a new genre affectionately called “Latin Grass.”  And it’s been an invigorating sound ever since.

Part of the Casa Azul of Greensboro InFusion Series. Presented by Casa Azul and hosted by Triad Stage.