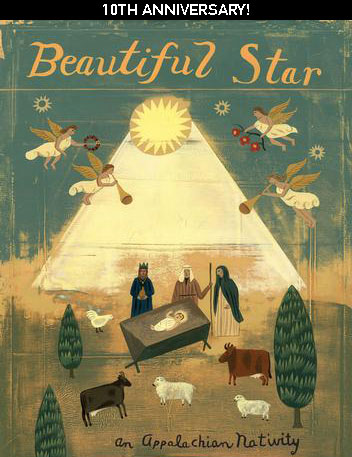 This winter Triad Stage invites you to come home again for the holidays. We take you to the peaks of the Blue Ridge where Reverend Roy Ledbetter and all the members of the Open Heart Community Fellowship have been working hard to fill your holidays with joy. Starting with Genesis and going all the way to the Nativity, they spin a holiday story with down-home laughter, toe-tappin’ music and a tug at the heartstrings as one of Triad Stage’s most popular hits returns for a 10th anniversary production.

Presented by The Carroll Companies.

“"This is a marvelous play, a provoking rendering of the Christmas story."”

As audiences across the country gear up to enjoy classic holiday stage productions, theatregoers in the Appalachian region are flocking to Triad Stage of Greensboro, N.C., to see Beautiful Star: An Appalachian Nativity (Nov. 25-Dec. 24), a production that has become a tradition to the community in the Blue Ridge mountains.

When I was a girl, the little country church where I grew up produced a play every Christmas. It was a tradition, a special time when the personalities of church members, with all their foibles and delightful quirks, were put on display to an always-packed house on Christmas Eve. The tiny darkened sanctuary, lit by (real) candles and decorated with greenery from the surrounding woods, along with the sight and smell of a towering cedar Christmas tree chopped down just hours earlier, was magical. There was really nothing comparable until Triad Stage’s “Beautiful Star: An Appalachian Nativity.”

One of the most repeated stories in history is that of the birth of Jesus. The Biblical nativity story traditionally depicts the Virgin Mary and her husband Joseph seeking shelter for the night, and the tale of the Three Wise Men who follow the North Star with their gifts. But what about what happened before the birth of Christ? And where does a banjo fit in? Answering these questions is Triad Stage with an anniversary production of its Beautiful Star: An Appalachian Nativity.

Every year Cinny Strickland asks Carroll “Chip” Johnson if he wants to be her husband. Though they’re not actually wedded to one another, the two have for the past decade played the Rev. Roy Ledbetter and his wife, Vestina, in Triad Stage’s “Beautiful Star: An Appalachian Nativity.”

“Sistern and Brethren!” the Rev. Roy Ledbetter greets the congregation. “Good evening to you all and welcome to the Open Heart Community Fellowship.” It’s the night of the annual Christmas play at the small church in the North Carolina mountains.