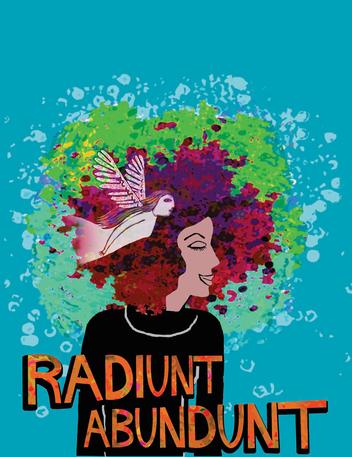 by Preston Lane with original music by Laurelyn Dossett

Two women are searching for a missing family member. An art collector discovers a new visionary artist. A desperate young woman seeks to build a home in the most unlikely place. And an artist with a secret past struggles to preach her faith with shape and color. This new contemporary North Carolina drama by the creators of Brother Wolf weaves music, story, and outsider art. Come along as these five women discover what they thought was lost forever.

Made possible with support from the National Endowment for the Arts

There are two sides to every story, including the picture behind the painting. When it comes to art, it can be interpreted in so many ways, almost making its storytelling abilities limitless. Exploring the many angles of art, perception, religion and family is the Triad Stage original Radiunt Abundunt, by Preston Lane and Laurelyn Dossett.

What is “Radiunt Abundunt”? It is heaven, it is hell; it is angelic, it is demonic; it is sophisticated, it is naïve. And it is an important new work written by Triad Stage founding artistic director Preston Lane and musician collaborator Laurelyn Dossett making its world premiere at Triad Stage

Triad Stage's world premiere musical Radiunt Abundunt is a rare theatrical event that comes once every decade: a near-religious experience.

Playwright Preston Lane and singer-songwriter Laurelyn Dossett have taken Triad Stage audiences from North Carolina’s mountains to the coast in their artistic collaborations. To create their sixth play, they immersed themselves in the world of outsider art.

Triad Stage will premiere "Radiunt Abundunt," a play by Preston Lane, Triad Stage’s Artistic Director, and local musician Laurelyn Dossett, on Feb. 21, 2016. It will run until mid-March. This past Saturday, Feb. 6, the two artists sat down together to talk about the play and answer audience questions at the Weatherspoon Art Museum.