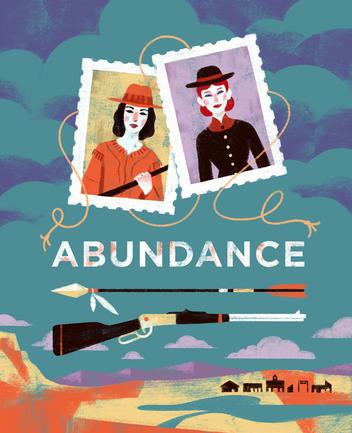 In 1860s Wyoming, two mail order brides meet while waiting for their husbands to arrive. Bess is a romantic, yearning for her one true love. Macon Hill is fiercely determined to make a new life in the wild, wild West. Far from what they expected, the years pass and their lives become entangled. When Bess disappears all assume she is lost forever, but when she returns with daring tales of life among the Indians, a new future beckons. A fierce and funny story of a friendship strong enough to survive natural disasters, kidnappings, and even husbands.

All of us are prey to illusion, delusion and disillusionment, and none of us knows what turns our lives will take or how graciously — or resentfully — we will weather them. Like life, Abundance is sad, humorous and hopeful, sometimes dark and difficult but, ultimately, worth the effort.

For richer or poorer in the Old West

Times change; people change; fortunes wax and wane. But friends are forever. Or maybe not, in the case of Abundance. Winston-Salem’s Hanesbrands Theatre, in association with Triad Stage, debuted Beth Henley’s Western comedic drama, Abundance, on Saturday after three nights of preview performances. “It’s a great way to fulfill our name by playing in two of the Triad’s cities,” Richard Whittington, Triad Stage’s managing director, told the audience before the performance.

Landscape is normally the domain of the painter, the photographer, or the filmmaker. Theater is often a venue reserved for smaller narratives that unfold with a direct intimacy between viewer and the performers. Triad Stage’s new production of Abundance completely shatters both of those conventions giving the audience a distinct impression of the epic landscapes of the American West, while at the same time telling a story as intimate as a campfire chat.

The production plays like a good opera, with all elements working together in harmony and every aspect playing to its full potential... Triad Stage has given us one of the year's unexpected delights.

Back in 1978, American dramatist and actress Beth Henley won a Pulitzer Prize for her play Crimes of the Heart. It was the Mississippi native’s first professionally produced play, and since then Beth’s become one this country’s most influential theatre voices. That voice is well known for blending the comic and the serious in nearly all of her pieces. A wonderful example can be found throughout her play Abundance which opened earlier this week at Hanesbrands Theatre in Winston-Salem, and is directed by Preston Lane.

Beth Henley thinks that what Triad Stage is doing with her work may be a first. “I think it’s unbelievably wonderful that they’re doing two of my plays back to back at two different theaters,” she said. “That’s just incredible. I don’t know if that’s ever happened before.” Triad Stage just finished a production of Henley’s most famous play, Crimes of the Heart, for which Henley won a Pulitzer Prize in drama. That play ran April 6-26 at the company’s theater in Greensboro. On Wednesday it begins previews of Henley’s Abundance at Hanesbrands Theatre.

It’s 1860 and two young girls—mailorder brides—wait in the wild, western desert to meet their husbands. What they didn’t know they’d find is a friendship strong enough to withstand kidnapping, natural disasters, Indian escapades and even marriage. For its last show of its second Winston-Salem season, Triad Stage presents Abundance, a dusty tale of loss, adventure and dreams by playwright Beth Henley.