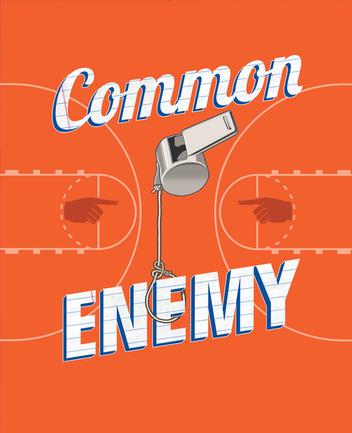 A season of remarkable upset victories sends NC’s Zebulon College to the NCAA basketball tournament for the first time. In the grip of March Madness the campus reels as an assistant professor threatens the school’s athletic program. In a state where college basketball is almost a religion and team rivalries stretch back for generations, the explosive study pits faculty against administration, student against teacher, and husbands against wives. Majority views threaten strong convictions as the courage to speak up comes under relentless attack.

How much do you love Tar Heels basketball? What about Duke? NC State? East Carolina? UNCG? Do you love them enough to take a good, hard look at the program? That’s what local playwright and director Preston Lane is doing. Lane is the co-founder of Triad Stage and his latest production looks more like a documentary of recent events than a play. Set in a fictional North Carolina college, the storyline will make you sit up and say, “Wow, that’s what’s going on, right now.” It looks at how these major programs are run and asks questions that – though, may be uncomfortable – need to be asked. See if you agree in this edition of the Buckley Report.

At Triad Stage, Common Enemy lightly fictionalizes NCAA scandals at UNC and beyond

According to Preston Lane, his new play, Common Enemy, is "not about basketball, you understand. Not really." It's an audacious claim. Designer Fred Kinney's basketball-court set at Greensboro's Triad Stage may not be regulation-size—half of it makes a 90-degree turn up the back wall of Pyrle Theater—but the netted hoop and backboard are in the right place. A scoreboard shows a win for the promising, if fictitious, Zebulon Zebras. And characters agonize or gloat over Duke's latest win over UNC as game footage on giant screens lingers on the martyred expression of coach Roy Williams.

Triad Stage often taps into its regional roots, presenting productions by great Southern writers as well as Appalachian originals. But this time the theater finally found the one thing that unites us all together—what each North Carolinian bleeds for—March Madness. Yes! Weekly interviews two die-hard ACC fans after the show...

An enemy of the b-ball

Common Enemy is and isn’t about basketball. It’s about pride. It’s about integrity. It’s about tradition. But it’s also about the evils of xenophobia, racism and resistance to change. Basketball broke some barriers in North Carolina. But Common Enemy proves even the most revered structures possess insidious motives.

With its themes of truth, exposing corruption, and the motivation behind it, Common Enemy is not just an allusion to the title of Ibsen’s An Enemy of the People. The politics of the play operate like a strategically maneuvered chess game, performed in the vain of a criminal thriller. But the play’s thrills are perhaps most scary for their immediate relevance: college athletics means big money and big politics. Common Enemy is sure to prompt debates and questions from its audiences. It is not very often that a piece of theatre comes along, let alone an original play by the director himself, that says so much about the things we read in the headlines every day. And in addressing such a sacred subject, Common Enemy does justice to the fact that in North Carolina there is much more to basketball than sport.

Audiences are raving about COMMON ENEMY

"Common Enemy embodies the truth of North Carolina basketball fanaticism in a way that is compassionate without flinching from the seriousness and scope of the matter." Click the link to read more!

Those are a few of the words patrons have used to describe COMMON ENEMY. And by now, you might be thinking "what is this show about? Why is it provoking such immediate responses?" Well, we’re glad you asked.

Basketball on tobacco road. Whistle-blowing both on the court and off. Multi-media. Scandal. Reputations in the balance. Core university values in the balance, as well. It’s looking to be the most innovative, timely and provocative production the theater has staged.

Preston Lane, Triad Stage's artistic director and the play's author, said the state's deep-seated love for college basketball makes it a natural topic for a N.C.-based play - as well as a source of conflict. "Basketball is something that I love," said Lane, who pledges his personal allegiance to the Tar Heels. But as fans know, there is a darker side to high-stakes, big-money college athletics. "It's a struggle. I know the NCAA is unfair to its players, and yet I'm a North Carolinian born and bred," Lane said. "I remember classes stopping when I was in school during March Madness. College basketball is so much a part of who we are."

Some Thoughts on Common Enemy

Founding Artistic Director, Preston Lane, shares his insights and inspirations for Common Enemy. A few might surprise you. Check out our blog to read them all!