The Member of the Wedding 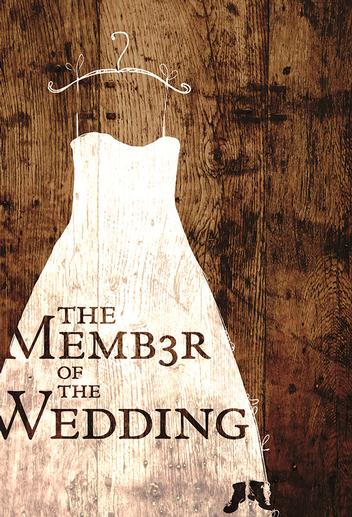 Frankie is a 12-year old tomboy tired of her small Georgia town and longing for a world of adventure and romance. Despite forming a fragile bond with Bernice, a maid, and John Henry, her seven-year old cousin, Frankie dreams of running away with her brother and his new bride. From one of the South’s most daring writers comes this acclaimed portrait of a girl desperate for a place to belong.

Photos The Member of the Wedding

News & Reviews The Member of the Wedding

"The role really suited Aidan’s personality. (John Henry) brings a real fun atmosphere to a tough, emotional show. While at times it’s dramatic, it’s also very funny. Carson McCullers has really captured what life was like in 1945 in the South. Frankie’s preteen voice is one audiences can relate to," his mother, Heather Armstrong, said.

Tween angst in the South a puzzler for Triad Stage

As the title suggests, Frankie wants more than anything to be a member of the wedding between her brother Jarvis and his fiancé Janis. After being smitten by the outward signs of their love, Frankie concocts a fantasy in which she is a part of the newlywed couple’s life. She wants to be married to them, to go with them wherever their road takes them. Noting that the couple’s names both start with the same letters, Frankie starts calling herself “Jasmine” in a running gag that actor Erin Schmidt plays to solid effect.

A Most Welcome 'Member of the Wedding'

[Cassandra Lowe] Williams’ performance is endearing, heartbreaking and even at times comical, as she alone negotiates the emotional chaos of the characters around her. It is no easy feat for an actor to convey strength and vulnerability, dominance while being socially oppressed and humor in the face of despondency. Williams delivers all with poise and presence.

Actress comes full circle in "The Member of the Wedding"

GREENSBORO — Triad Stage regularly brings working actors from across the country, particularly the New York City stage scene, to perform for local audiences. But the Triad itself is home to talented professional actors. And one of them, Greensboro’s Cassandra Lowe Williams, has found a home at Triad Stage. Williams plays the role of Berenice Sadie Brown in “The Member of the Wedding.”

Most of us would never choose to go back to that awkward place of emerging pimples, voice changes and uncomfortable social ventures — I’m talking about middle school. But one actress takes on the challenge and reminds us how fun it can be to get in touch with your inner child. Erin Schmidt, 23, is “letting go of everything (she’s) been taught as an adult” to play a misfit child in Triad Stage’s The Member of the Wedding, written by Carson McCullers and directed by Preston Lane, Triad Stage’s artistic director.