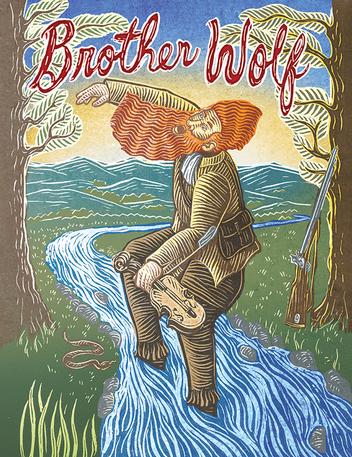 In the hills and hollows of the Blue Ridge, good and evil are in constant struggle. Demons lurk in the dark forests and the early pioneers are under constant threat. When the Speerdane family dares to build a church, they awaken the violent monster, Grin Dell. The legendary mountain man, Brother Wolf, arrives to lend a hand and sparks a cycle of revenge that hurtles out of control. In the tradition of the award winning film O Brother Where Art Thou?, Brother Wolf is infused with traditional music and epic storytelling. Featuring performances by acclaimed musicians Laurelyn Dossett and Riley Baugus, the play includes Dossett’s song Anna Lee (Levon Helms’ Grammy Award-winning albums Dirt Farmer and Ramble at the Ryman).

THROUGH 5/25: Triad Stage's Brother Wolf Is a Journey of the Soul

"Triad Stage’s production of Brother Wolf is profound in the most universal way."

Brother Wolf is a tremendous achievement in live theater. From the soaring poetry of its language to the subtle grace of the music, The Triad Stage’s second production of Lane’s work does not disappoint in any way. Engaging the intellect and the soul, Brother Wolf is both timely and timeless, and a solid reminder that even in the darkness of our mysterious and primordial past, to be human is to share stories.

In the hills and hollows of the Blue Ridge, good and evil are in constant struggle. Demons lurk in the dark forests and the early pioneers are under constant threat. So begins the liner for Brother Wolf, the play by Triad Stage Artistic Director Preston Lane. It’s filled with epic storytelling, and outstanding original music composed by acclaimed singer/songwriter Laurelyn Dossett. Laurelyn says that when Preston first approached her in search of that authentic sounding score for Brother Wolf she said she knew right away it had to sound like Riley Baugus.

Riley is a musician’s musician, and he’s highly sought after for bringing out the best of old time American banjo and song. In fact Billboard Magazine said Riley’s vocals, “…sound like they've been echoing through the Appalachian Mountains for about 150 years." He and Laurelyn will perform live for the duration of the run of Brother Wolf which opens Friday night May 9th at 8:00 PM in Hanesbrands Theatre in Winston-Salem.

Climbing the Appalachian Mountains ... in Winston-Salem

An Appalachian folk story isn’t just told by a fireplace or spread only by the word of twang-laced mouths; it’s also told through song. Celebrating his Appalachian roots once again in the Triad is Preston Lane with his original work, Brother Wolf, which combines epic storytelling and live regional music.

When Preston Lane, artistic director at Triad Stage, was asked to expand the regional theater’s programming to the Hanesbrands Theater in Winston-Salem, he looked for a signature piece that best represented the company’s body of work.

Demons roaming the countryside, an act of faith awakening a monster, a stranger lending a hand, a cycle of revenge. If this sounds a little like your high-school English class, you’d be right: It’s Beowulf, the Anglo-Saxon epic we all struggled through as teenagers. But the story is reset in the Appalachian Mountains, accompanied by a soundtrack of roots music. And Grendel the monster becomes Grin Dell, while the titular hero is an itinerant preacher named Brother Wolf. And if that name is familiar, you’ll recall it made the rounds several years ago as an original production of Triad Stage.

Written and directed by Preston Lane, with original music and musical direction by Laurelyn Dossett, BROTHER WOLF is set in the mountains of North Carolina and Tennessee, where good and evil are in constant struggle.