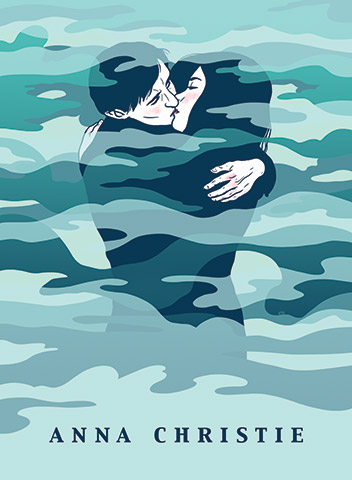 A coal barge captain spends his days at a dingy waterfront saloon, cursing the old devil sea.   A letter arrives from his long lost daughter announcing she is coming to see him. She’s a stranger to the sea, but has devils of her own.  She sets to sail with her father searching for a family she has never known.  When they rescue a powerful, rough sailor, she falls in love. But as they journey on, her past secrets threaten her hope for a new life. The first great American play by America’s only Nobel Prize winning playwright is an astonishing love story played out against the tempestuous sea.

It would be easy to take the serious themes of Anna Chrsitie and sink a production into one-dimensional gloom. Under Preston Lane's able direction, however, the play succeeds brilliantly at reaching the depths of existential angst while bobbing back up to moments of glimmering hope and twinkles of love. This beautiful interplay has us wondering until the very end if we are in for a tragic or uplifting story.

Amid the search of harbor lights, buoyed on waves, and pulled by a current, the truth refuses to stay adrift. Inevitably, the past always tends to wash ashore. Fortunately for theatergoers, Triad Stage’s remarkable production of Eugene O’Neill’s Anna Christie proves that the past is rich with theatrical gems!

The sea is a controlling force in Triad Stage's "Anna Christie"

Eugene O'Neill, whom many would consider America's greatest playwright, was not known as a political pundit. Yet, many of the themes he explored as much as a century ago, though not overtly political, have a keen relevance and timliness, particularly those of lost opportunity and the ability either to rise above one's circumstances of birth or blame outside, uncontrollable forces.

Triad Stage’s Lucky Season continues with ANNA CHRISTIE by Eugene O’Neill. The first great American play by America’s only Nobel Prize-winning playwright is an astonishing love story played out against the tempestuous sea.