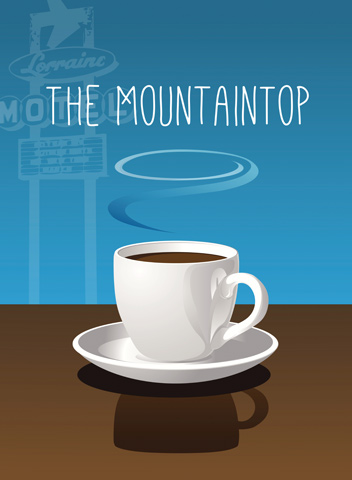 April 3, 1968. Memphis, Tennessee. After delivering one of his most memorable speeches, exhausted Dr. Martin Luther King, Jr. returns to his room at the Lorraine Motel. He just wants a cup of coffee, a pack of cigarettes and a good night’s sleep. But when a very attractive maid arrives with his coffee, King is thrown off balance. As the night progresses and a storm rages outside, the maid reveals herself to be much more than King first believed.   A triumphant and surprising celebration of the human in history unfolds as King’s mysterious visitor guides the way through the dangers and the joys of the journey to THE MOUNTAINTOP.

THE MOUNTAINTOP is presented as a co-production with PlayMakers Repertory Company.

Presented with support from O.Henry Hotel.

The Mountaintop envisions the last hours of Martin Luther King

But when a rescue's taking place in an accounting of a life, it's usually important to determine what the writer believed was in need of rescue, and why. That's one of the questions still haunting me after Saturday night's premiere of The Mountaintop, playwright Katori Hall's imaginative and controversial account of Martin Luther King's last night alive.

THE MOUNTAINTOP Puts a Cultural Icon in a New Light

A rainy Saturday evening in Chapel Hill was fitting for the opening night of PlayMakers Repertory Company's production of The Mountaintop, produced in partnership with Greensboro's Triad Stage. The play, written by Katori Hall, also takes place on a rainy evening - a fateful one: April 3, 1968 in Memphis, Tennessee. It was the night before Martin Luther King, Jr. was shot, and it follows the man through his final evening, which was spent in his hotel room. Hall mixes historical reality with playful conjecture to create a piece which is heartwarming and thought-provoking.

In, "The Mountaintop," an imagining of MLK's last night

In “The Mountaintop,” Katori Hall’s play about the last night of the Rev. Martin Luther King Jr.’s life, just two actors are on stage for the 90-minute production. It’s quick and long at the same time, said Cedric Mays, the actor portraying King... Without an intermission, it just “goes, goes, goes” without even a water break, he said.

“This play celebrates the legacy of MLK Jr.,” said Preston Lane, artistic director of Triad Stage. “It reminds us that at one point he was going to take us to the mountaintop. He started a journey for freedom and justice and equality in America. We’re carrying on his dream of what greatness America would be capable of.”

Katori Hall's Stirring Drama, "The Mountaintop," Is Set on the Day Before MLK Was Assassinated

The Mountaintop is a stirring two-character drama in which 32-year-old African-American actress and playwright Katori Hall imagines what might have happened on Civil Rights leader Dr. Martin Luther King, Jr.’s next-to-last day on Earth — on April 3, 1968 — and asks “What if?”